Are you looking for some easy instructions to play the 7 11 dice game?

Do you want to try your hand at this very popular dice game?

Are you looking for some effective tips that can help you better your game and also possibly win?

If you have any such questions about the dice game 7 11, then all you need to do is read this article till the end. One of the most important reasons for reading it carefully is that we are sharing some very easy and step by step instructions about the game that will tell you everything you need to know before you set up and start playing.

We will share complete details about the number of players that are best suited to play this 7-11 dice game, as well as the materials you may need to play, things you need to do to set up the game, as well as instructions, how to keep score and how to win. So, if the 7 11 dice game is next on your playing list, go on and read!

This is originally a drinking game that is best played by adults in a home drinking setup or at clubs and pubs.

Is this 7-11 dice game known by any other names?

The 7 11 dice game is also known by some other names such as:

As 7 11 is a simplified version of the original game, it is fairly easy to learn and play. This offer is also a very fast-paced game, which means that you will never get bored.

How many players can play?

Materials Needed For This 7-11 Dice Game

The fun part about playing the 7 11 dice game is that you can play it as per the variations you choose. Here is a look at some of the more popular versions that you can try with your friends:

In this version of the game, players don’t really try to win or compete, but the fun is in playing it as a purely drinking game. The objective here is to try and roll a 7 or an 11, so that you can make some other player take the hit and keep drinking more and more. Here are the steps to play:

The Keeping Score and Winning Version

In this version of the game, players try to win or compete by avoiding the very same thing they were trying to do in the previous version. In this version, players try to avoid rolling a 7 or an 11, because once that happens, it means they lose all their points in that particular round and also lose their turn. Here are the steps to play:

How to keep score?

Here are a few combinations you can use in the game to keep score and move towards a winning player:

While it’s a lot of fun to play this 7-11 dice game, remember to drink responsibly and respect each other as you play and drink. Also, please refrain from drinking and driving. 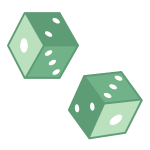